Berno Odo Polzer attended the choir rehearsal of African Joys in the church of Molenbeek (May 5, 2013). Berno worked on the text of Lecture For Every One together with Sarah Vanhee and Juan Dominguez Rojo. It was his first encounter with a ‘real audience’ of LFEO. 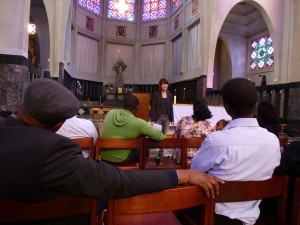 When does the eyewitness begin his witnessing? Does it start with my way to the church of Molenbeek where LFEO will take place in a rehearsal of the “African Joys” gospel choir, with my bike-trip down the Mont des Arts, thinking how different it is and feels to move to an unknown place at daylight than to tread the recurrent early evening path to one of the few theatres that keep presenting performances? – Or does it begin with the waiting time in front of the church, where kids play football and friends and families of all ages hang out in the rare sun, during which I become aware again – despite my own assessment – of how little evident the preoccupation with art actually is, and how small a plant in the jungle of societal activities. – Or with the kindness of welcome by the choir conductor who picks us up at the church square, a welcome that from one moment to another transforms my position from that of a theatre spectator and eyewitness to a project I was involved in to that of a guest in a community I am not part of? – Or with my knee-jerk reaction of ambiguity – awe and repudiation – while entering this sacral space flooded with coloured light, and the uncanny feeling that whatever happens here will be subjected to the regime of sacral theatricality. – Or should I go deeper and begin with giving witness to the involuntary touchiness of my (self-)conscious mind’s living through yet another moment of postcolonial stalemate? – Or else, does it simply start with the beginning of LFEO, with Mylene Lauson, the performer, welcoming the 10-or-so listeners with the words “Bonjour et merci de me donner les 15 prochaines minutes pour vous parler…”?

It doesn’t really matter where to start. For much less clear a line is drawn here – in this “real life” environment LFEO chooses to confront and to confront itself to – between me, the witness to living a life, and me, the witness of a “performance” organized within the Kunstenfestivaldesarts; much less clear a demarcation than inside the framework of theatre. This is an aspect of LFEO I notice only now, as someone being part of the LFEO team traveling from meeting to meeting. And isn’t it a pity that precisely this experience is inaccessible for the audience of Kunstenfestivaldesarts?

But all this is not to say that there is no theatricality involved. On the contrary. This version of LFEO – and writing this I notice how strongly the text of LFEO and its meaning are being transformed by the respective context they are intruding into, despite the fact that the text remains exactly the same –, so yes, this version of LFEO strikes me as being especially “theatrical.” A sense of deliberateness prevails here, more than in the theatre or any other presentation I’ve witnessed; a sense of careful choice of words, of self-awareness of the text and its performer towards this situation. Although Mylene says the same words in a very similar way as the day before in the French premiere in Beursschouwburg, they now sound different and occasionally take on another meaning. What was a personal story told by an individual yesterday in the theatre now appears to be a text spoken by a strange performer from another world. What was a general demand yesterday, here it appears to be much more specific a statement made by an agnostic young middle-class woman.

Differences are being marked, made visible, and proliferated by LFEO, I am thinking. No indeed, as I thought I already knew, a “we” does not exist; and even less is this non-existent “we” capable of producing common concerns. Or is it? Did I maybe get it all wrong, from my relatively well-off, areligious, individualistic middle-class position? – Such are the questions LFEO points me at in this specific environment, and the difference between the many situations it seeks and finds itself in amplifies these questions in every-changing and unpredictable ways.

As LFEO comes to its end and Mylene leaves the “stage” and the church, my position changes once more. Me, the eye-witness to an art project, now left alone by the performer whose presence justified his own presence, now finds himself ever more strange, in the middle of a gospel choir rehearsal in Molenbeek, amidst a warm and friendly crowd of strangers. “Where did she go?” one woman asks, flabbergasted as if hurt by the rudeness of a gesture that, yesterday in the theatre, was normal and expected. “Does she not come back?” And while trying to catch some comments from the crowd – “that was beautiful,” says a man; “she should have spoken for half and hour, not 15 minutes,” says another –, I leave myself. Not because I want to, but because to stay would mean to transgress a border, that between an art experience and a real social situation. And that is not what I am here for. Or am I?