Elisabete Paiva is artistic director of Materiais Diversos. She organized and attended all five private LFEO in Minde. Elisabete wrote an eyewitness report about the presentation of LFEO in the frame of an administration and chief physicians board meeting at Centro Hospitalar do Médio Tejo. 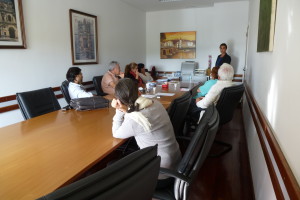 LFEO in Médio Tejo Hospital was probably our most difficult meeting.
We had gone through a long process of intermediation in the institution till we reached our CP.
She eventually sent me a one line email, showing her availability, but asking for me to call her only in the evening, after hospital. Evenings are fine for me, I thought – maybe I forget so many people work long hours…

We finally managed to talk, a couple of days later, and she warned me insistently that doctors are not able to concentrate. They think about ten things at a time, they don’t have time. She insisted on this idea – they will not be able to concentrate, not be able, not more than a few minutes. (I kept it in my mind).

We got there on time, the time we were told, in the middle of the meeting, since in the first hour they don’t concentrate, they don’t concentrate (in my mind). We tried to keep Anabela confident, but I was hell nervous.
Our CP got out briefly to welcome us. She was tense, a very beautiful woman, tense, but trying to be welcoming. She went back to the meeting.
While we waited, we could hear someone fighting really loud.
Our CP called for us some minutes later.

We got in a small room, where only five people waited for her and us. We were all very close to one another, chairs in the way, but Anabela took over and got the group’s attention in the first minute. I believe, like in all other sessions, me and Linda got transparent in seconds, and it would be so for 15 minutes.

We were transparent, but words were thick, they were heavy, heavier than elsewhere (for me). We were so close, yet so tense. Was it that they couldn’t really concentrate? Was it that they were forced (that we are forced) not to concentrate.
One was oblivious after three minutes or so. One was irritated for most of the time. Four were with Anabela. One relaxed in the chair, often smiling. One looked like a child in certain moments, surprised. One cried. How could Anabela deal with it. (I thought.) But she could. Beautifully. (I thought.)

They applauded, like in other LFEO sessions. It is strange that they applaud. But they did. Though so tense. Though we asked for such precious time, for their unusual concentration. They applauded after such a violent moment. (I thought.) How come to regain the time that we are due, is so violent? How far are we from being together?

We left effectively.
One of them came out after us, hapilly asking: “It’s Materiais Diversos, isn’t it?”
And I was finally relaxed.