Iiris Viirpalu attended ‘Lecture For Every One’ at La Caisse des Dépôts in Paris (June 2014) and wrote the following text. 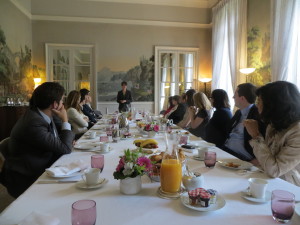 Lecture as a gift

At first I find myself in a bit of an intimidating situation when walking into the courtyard of La Caisse des Dêpots on the bank of the Seine in Paris. Of course I realized that the lecture would be held in a rather official atmosphere, but the security guards checking my name and putting it on the guest list in a special security room make me feel like soon I will get access to a national secret. At least if I’m lucky. That in mind, I feel a strong sense of contrast between the atmosphere and the subject and text of the lecture.

While I imagine financial officers in suits and ties, we are guided into a waiting room where Mylène is preparing herself for the performance to come. To me, the formal aspect of the institution sets the frame for this lecture as a quite strict one, somehow adding a little quirk to the situation. Right before heading to the meeting room I hope that the listeners will be open-minded enough to let their beliefs be touched, perhaps even lightly shaked.

A slight confusion mixes up with anticipation on the faces of the people present – they have no idea how to react or what the lecturer has to offer. In general everyone is favorably inclined, seemingly curious about the interruption that sets them free of regular morning routine, if only for 20 minutes. Mylène starts to speak and it is surprising how some of the listeners are not really paying attention but instead chatting behind their coffee cups.

It seems like a whole perspective, perhaps a whole mindset has been enlightened during these minutes in that room. From the faces I can read different reactions, some of them surprised, some relieved, some concentrated to the inner world. An exchange of ideas, a warm recommendation pointing towards something positive and ever-evolving. Not for a second aggressive or dictating, it makes room for freedom of thoughts. The text leaves the decision to the listeners and rather than pushing them in a certain direction, it shows some possibilities behind the curtains. The subtle understanding echoes on the face of those sitting in this room. I really do hope that some of them found a thing or two that they thought to be lost in the blur of passed time, routine and everyday commotion.

It is clear that every single one of those inviduals finally has his or her own interpretation. During the performance I capture a variety of emotions: some reactions are more delicate and show only the echo of what’s really happening in the mind of the listener. Some of them are still chatting even when the performer starts to talk about important subjects like freedom, care and society. Some of them seem to be really touched and shifted, especially a woman who has been listening carefully since the beginning.

The context – public finance – connects perfectly with the ideas of power and collectiveness that are mentioned in the text. I wonder whether the employees feel a kind of personal responsibility or know that they somehow help to reproduce the system in Marxist sense. But as I’m only an eyewitness, I have no acces to what others are really thinking and experiencing. Still I am a witness of an important moment between human beings. A moment that for some minutes creates an understanding and shared feelings between people who might not be very close to each other. And that moment is pure, raw, sincere and real.

By the end of the last phrases, in my personal opinion, the lecture could equally be named as ‘Gift For Every One’. But it gives something only for those who let it.