Jan de Zutter is press officer for the Flemish Social Democrats. He was one of our contact persons in the European Parliament and was asked afterwards to write a report about LFEO there. 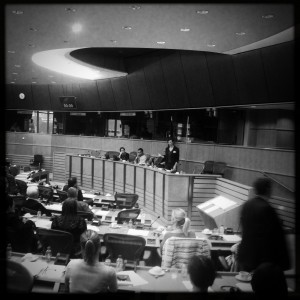 They weren’t prepared for it, the social-democratic parliament members of the European Parliament. The planned meeting of the workgroup Transport, responsible for the preparation of all major European transport dossiers, had as a second point on the agenda “Lecture For Every One.” No further explanation. It also seemed as if no one had noticed this item until president Saïd El Khadraoui (sp.a) asked everyone’s attention for a short intervention by an artist, Sarah Vanhee. Being caught out in the moment that you least expect it, by a young woman who just takes the floor, at the pulpit where statistics, legal texts, numbers and ideological statements compete with each other in a phallic measuring contest. I had taken place amongst the parliament members and carefully gauged their reactions. At the right some young women listening, captivated, although their look revealed a sort of disbelief. A text about democracy in the House of Democracy. Uncanny. There’s something the matter with our democracy. Everyone feels it, like rheumatics feel autumn approaching. Maybe the simple words Vanhee uses sound like gibberish in an environment that in splendid isolation has invented a jargon that has alienated ordinary citizens from the political elite. Not that they should be seen as evil. Contrary to what the crowd thinks, a lot of European parliament members work like crazy in the political rat race and they do consider a long term vision, much more often than national parliament members. But they do this within the outlines of “the system.” The very same system that Vanhee questions. What does the system desire from me? Can I talk with the institutions that represent me? A rhetorical question, in the heart of European democracy. “Are you listening to who I am? To who you are?” “Let’s create a moment together”. A silence follows. A moment of silence. An absence of speech that does not belong in a place where the word impatiently wants to convince. Even words become subject to doubt by Vanhee. She singles out concepts that are being abused like choir boys by their priests. “Care.” Not the organised, institutionalised care, but a deep involvement, originating from empathy. What do we still care about? How are we, all these “I’’s in this room, going to live together?
Vanhee disappears as quickly as she came. The guest lecture has taken about 15 minutes. Europe focuses once more on the small solutions for the big problems. Meanwhile a shutdown of the American government looms, and rejected asylum seeker and plumber Navid Sharifi lands in Moscow, a stopover on his forced return to Afghanistan. Care? Or law?