Eyewitness Maija Muinonen, about Ministry of Social Affairs and Health of Finland

Maija Muinonen is a Finnish writer. She attended LFEO for the PR department of the Ministry of Social Affairs and Health of Finland. 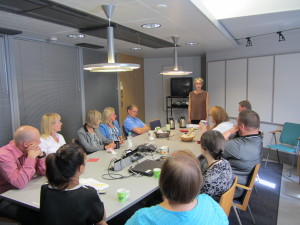 Ten people sitting on both sides of a table. Round lamps above their heads, the light is bright. Light is also streaming in from a window. The ten people sitting at the table are surrounded by empty chairs, two black screens, not a lot of empty space. It feels like the room is being used exactly like it is designed to be used. It is filled with precisely the objects that it is designed to be filled with. The air smells of coffee. This is a meeting room all the ten people have been to many times before. They might even have their own seat they want to sit in every time. Coffee cups on the table. Everyone has their own special cup. The cups sit on the table like miniature versions of the people sitting around the table. Some of the ten have started to eat biscuits, but no one chews during the lecture. The half-eaten biscuits are also listening.

Elina stands at the other end of the table. It looks like she is standing in exactly the right place. Ten heads are turned towards her but not all ten pairs of eyes look at her, some are concentrating on some small detail on the surface of the table. She has her papers on the table. She doesn´t look like an outsider or an intruder. She looks like she is concentrated, open, she wants to share. Her papers are like miniature versions of her. They are all together.

Elina starts her lecture and at first the ten people are tense. They think they have to say something, do something. Some react, others realise that these are the ones who react and the rest can just sit.

Then everyone relaxes. They start listening, their ears grow bigger. Some eyes are still on the details of the table surface. Some sip coffee while listening. When they put the cups back on the table it is done carefully, silently. Under the table one right hand is stroking one left hand.

After Elina´s last words the ears go back to normal size, eyes move, heads twist to look at the people around them.