Rui Catalão is a theatre maker and a writer. His work deals with memory, chance, fragility, transparency and the way we change the perception of bodies through storytelling. He wrote the following text after witnessing ‘Lecture For Every One’ at Nova & Hospital Santa Maria. 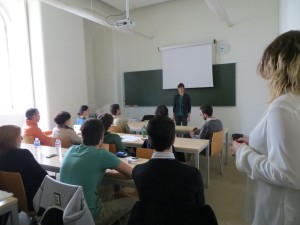 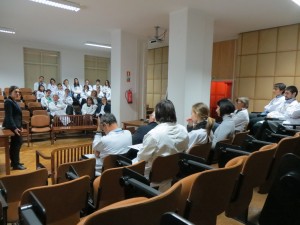 No context except meaning

The first time I saw Lecture For Every One was in the class of Prof. Susana Peralta, Director of the Masters in Economics (in Nova School of Business and Economics, Lisbon). When Sarah Vanhee asked “do you think you are richer than me?”, a student asked her to show her shoes, but he didn’t dare to take a guess after having a look. The rest of the students giggled. Throughout the rest of the lecture nobody gave the slightest sign of awkwardness. They had enough sense of humor to answer questions with new questions, and the fact that someone’s boyfriend might feel sexually attracted to carpets didn’t shake them beyond the limit of a comic relief interlude.
Looking at this neutral, self-assured group of young adults, I couldn’t guess to which extent they were taking this “moment” just before they would go on with their class. They witnessed the 15 minutes lecture with no further distractions, they clapped their hands, I was out.
Were they studying to become businessmen and businesswomen? It didn’t show. Maybe that’s the core of what they are learning – not to show.
On our way out of the university campus, I told Sarah that though she was presenting her work as a lecture, I took it as a performance. There was no space for questions in the end, and even when the students made some comments during her speech, they were just acting cool, as if they were aware that it was all a game of which they weren’t given the rules, and even by then they could not allow themselves to lose it.
Later on I went to the Hospital de Santa Maria, where the actress Anabela Almeida was going to present the Portuguese version of Sarah’s lecture. We passed by a corridor with ladies behind desks selling handcraft, and with an anesthetized patient being carried in a stretcher to the elevator. We got inside an auditorium shaped as an amphitheater, where a symposium on rare diseases was taking place. With the exception of two seniors, everybody was wearing white coats, so it became pretty obvious who weren’t the doctors. Anabela made her speech in the arena. There was a female doctor in her 50’s that listened to Anabela with the compassion of a therapist witnessing a moment of truth and personal release in the life of somebody that never before came out. Her colleagues were less impressed. Some of them pulled out their iPhones from their pocket, others started looking at each other or at their wrist-watch, one of the seniors started making comments at the ears of his pair. For the rest of them, it wasn’t obvious if they froze waiting for an explanation, for understanding or simply for the end of the 15 minutes. Anabela told me later that somebody in the audience could not even understand the reason why she had been taken from her duties to attend that “moment”. It became apparent that most of them in that small auditorium where running a schedule and that Lecture For Every One was coming from a place pretty far from where their minds were set on.
Less than three minutes after, Dr. Ducla Soares, that had presented the “surprise” act came outside with mainly two different feedbacks from his fellow colleagues: that the issues addressed in the lecture were not new to them; I must confess I forgot the other one. Anyway, Dr. Ducla Soares himself was very curious if some kind of assessment was being made. As if the lecture could only be valuable according to the effects it might provoke on their patients… excuse me, on their audience.
Saturday, December 14. Lecture For Every One was presented in Teatro Maria Matos, and even if the whole project was presented, explained and even discussed with the audience, I was left with the same impression I had with the two “surprise” presentations of the lecture I attended the day before: that Lecture For Every One provokes in the audience the effect of a black monolith, or a reflecting glass. Why do people require context in order to accept a “moment”? Even the ones available to accept that “moment”, and be vocal about it, express exactly the same kind of ideas they could have developed dealing with whatever kind of lecture or performance or theatre act. Like: How did other people react? In what way did it affect them? Did it change what they were doing after?
I cannot pretend context doesn’t matter. It matters. The three different places, with their specific conventions and purposes, affected me differently in the way I perceived Sarah’s lecture. And the worse people seemed to react to it, the more effective the performance looked to me. After all, individually we always think seriously about what we want to do with our lives, but actually, depending on the places we find ourselves, we keep on acting according to what we think we are supposed to do. And maybe that’s why it doesn’t matter if it’s a lecture or a theatre act. Why should I care what it is, if I don’t care what it does to me? And if it affects me, would knowing that it’s a lecture, and not a theatre act, affect me differently?